We have a wide selection of captive bred star tortoises for sale, including the smallest of the Star Tortoise family,  the Indian Star tortoise, which reaches sizes of 5-9″.  We also have beautiful captive bred Sri Lankan Star tortoises which get a bit larger at 7-13″ and the largest of all the Burmese Star tortoise, still a fairly small tortoise reaching sizes of 8-14″.  We offer a variety of sizes and ages ranging from fresh hatchlings, well-started babies (highly recommended over fragile hatchlings) yearlings, juveniles as well as young adults.  All of our Star tortoises come with our full live arrival and health guarantee.  With a Biologist, ON-SITE turtle store strives to provide the best “star tortoise for sale “selection in the world.

Indian star tortoises are some of the most popular and beautiful tortoises in the world.  Staying the smallest of all star tortoises, the Indian males only reach 5-6″.  Female Indian Star tortoises can reach up to 8-9″ but most around 7.5″ at full maturity.  Most of the growth happens in the first 10 years. They should normally live for about 30 years, but the current record is 55 years in their natural habitat. In British terminology, they are tortoises, not turtles, as they do not live in water.

The Indian star tortoise is one of the most beautifully decorated tortoises, and is relatively uncommon as a pet. These tortoises are from the “dry-zones” of India and Sri Lanka, and this is the environment that we try to replicate when keeping them. They require different care than the more common Mediterranean tortoises.

Indian stars are terrestrial, living on the ground. They can be quite easy to care for, with and can live comfortably in smaller spaces than equally sized small tortoises. Because of this, Indian Stars requires less attention and exercise. Indian stars are still outgoing once they are used to their owners.  Also, well adjusted Indians are intelligent enough to bond with their owners.

As youngsters, they have beautiful yellow butterfly-shaped markings on a rich, black background. As they grow, the yellow markings extend into narrow star rays, pointing in all directions from the centre of each scute. They are a little more shy than the common Mediterranean tortoises, and do not demand so much attention.

An attractive species, the burmese star tortoise features an oblong and moderately domed carapace that is dark in color (black to deep brown). Each scute or plate is stamped with a beautiful star or flower petal pattern which is different than that of the indian star tortoise (G. elegans). This pattern is yellow or cream colored and may cover a larger portion of the scute depending on the individual. “Wide banding” of the pattern, as it is sometimes referred to as in more aesthetically pleasing specimens, is highly sought after by collectors searching for burmese star tortoise for sale.

However, all Burmese stars are something to see regardless of the abundance or “width” of the star/petal pattern on the shell. On each of the five vertebral scutes that span the spinal length of the carapace, platynota feature no more than six lines or points that sprout from the center marking of each scute. The first vertebral scute usually exhibits five lines which then increases to six on the second, third and so on.

These lines, rays or points will span the entire scute and meet the ends of others to form a noticeable “net-like” pattern when viewing the tortoise from above. On the plastron, dark, triangular or trapezoidal shapes are found on a cream colored base. This is not found on the Indian star which typically sports continued “star-like” markings here.

The head of the Burmese star is yellow-ish or light colored with fewer dark areas than the head of the Indian star. Long, powerful legs with thick scales enable the tortoise to walk “tall and proud”. Large, dark eyes on either side of the head protrude and give this species a rather wise yet comical look. Geochelone platynota can attain considerable dimensions with females surpassing 12 inches.

Looking for a Sri lankan star tortoise for sale?

These beautiful captive bred Sri Lankan Star Tortoise hatchlings are eating like champs.  The Sri Lankan star is a beautiful addition to anyone’s exotic tortoise collection.  Bigger than the Indian Star, Smaller then the Burmese, the Sri Lankan is a gorgeous tortoise, and brightens up anyones collection.

Our Sri Lankan Star hatchlings have fantastic bright yellow body, head and shell highlights contrasted over deep brown/blacks.  Aprox. 2.25-2.5″ in size.  When choosing a Sri Lankan Star baby tortoise for sale, please make sure you are buying from an experienced tortoise breeder and keeper! We guarantee to have the highest quality baby Sri Lankan Star tortoises for sale. 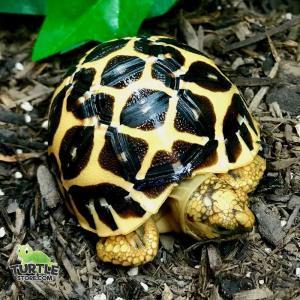 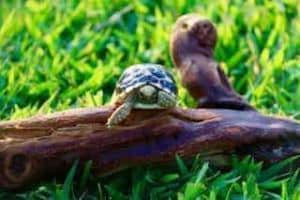 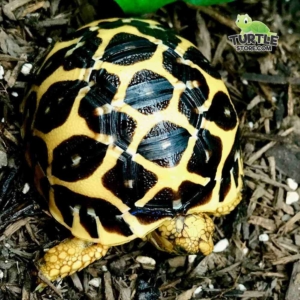 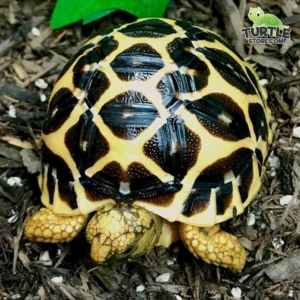 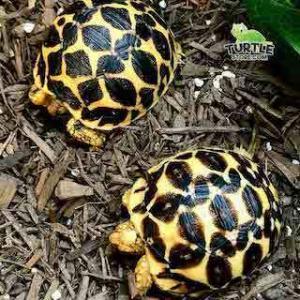 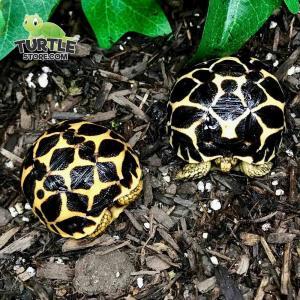